Philosophers Stone Quote: “I remember every wand I've ever sold, Mr. Potter. Every single wand. It so happens that the phoenix whose tail feather is in your wand, gave another feather - just one other. It is very curious indeed that you should be destined for this wand when its brother gave you that scar.”, Mr Ollivander to Harry

The Philosophers Stone was where it all began.

Who would've thought that the actions of J.K. Rowling, in writing the Harry Potter series of books, would have such wide ranging ramifications for a large slice of humanity?

The fact that I'm sitting down to write this page (and the fact you're reading it) is directly related to her actions that day on the train when the idea for Harry Potter literally "popped into her head."

It's strange how small actions can have far-reaching effects and those effects "ripple down through history".

I think the reason the series has become so popular is due to the fact that the first book was written so well and contains many imaginative and entertaining ideas.

Who wouldn't be impressed by all the characters and creatures Rowling created?

Every child (of every age) loves the drama of dragons, wizards, magic, battles between good and evil and the like - I mean, it's all there!

From the time the baby is delivered to the doorstep by a huge man on a flying motorcycle we're hopelessly drawn into the drama.

I think having a "window" on that world makes us feel like it could be happening to us.

We're forever thinking what we would do in that situation. I think that's how we've been pulled into stories from time immemorial.

Here's the trailer for Harry Potter and the Philosophers Stone...

Children are drawn to the Drama of the
Philosophers Stone!

I know as soon as I start to read a book in my class, and it can be any book, the children are drawn into the drama of it immediately.

The younger they are, the quicker they're drawn in but I suppose that's because of their naivety somewhat.

But I do think we're all conditioned to listening to stories.

I even noticed recently the audience in the premiere of Deathly Hallows when Hermione was talking about the Three Brothers (Deathly Hallows Story) be drawn right in to what she was saying.

They were leaning on the edge of their chairs and listening even more intently to a story within a story - mad!

But back to the Philosophers Stone.

The character of Harry Potter i.e. his determinedness and sense of survival is honed in the ten years that he suffers at the hands of the totally uncaring, mean-spirited and even cruel Dursley family.

All of them are selfish and self-centered and spoilt, especially Dudley.

It's all Harry can do to keep out of their way and try to have some semblance of normalcy.

He's not always successful of course but at least this experience has made him self-reliant and resourceful.

His rather dormant magical powers even help him out on occasion, like when we see him suddenly on the roof away from the bullies and out of harm's way.

Even his hair is "defiant", always growing back the next day to the length it was before it was cut - cool!

By the time he's ensconced in Hogwarts School for magic he's starting to form quite a strong and positive self-image able to withstand the peer pressure that Malfoy not so subtly tries to apply.

Not only does he instinctively know that Malfoy is a "bad egg" but that Ron Weasley, on the other hand, can be trusted to become a firm and fast friend.

Harry's perseverance and skill stand him in good stead over the year with games of very competitive Quidditch, enormous trolls, three-headed dogs and of course, Voldemort himself, albeit in a diminished form.

By any measure, Year 1 at Hogwarts saw Harry Potter grow up significantly and lay the foundation for his future challenges and ultimate triumphs beyond the Philosophers Stone.

It also saw him firmly plant himself, and his friends, in our hearts and that's why the characters are so engaging and we're always interested, even fascinated, to see what they're up to next.

Indeed, I think J.K. Rowling has somehow learnt magic herself and has all of us under her spell - the ultimate witch! :))

Watch J.K. Rowling read some of the Philospher's Stone to eager children...

Read my take on the next installment after the Philosophers Stone - The Chamber of Secrets... 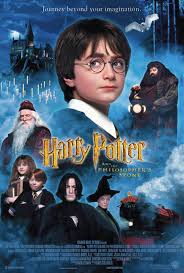