Each Harry Potter trailer on this page will give you just a glimpse into the action, drama and detail that has been the number one film franchise of all time.

But, although only a glimpse, these movie trailers will allow you to get the gist of each film as the series has progressed.

It's just the short type of entertainment news you're looking for!

That is, if you haven't seen them or even read the books or seen the films...where have you been for the last ten years??? :))

The first film, Harry Potter and the Philosopher's Stone ( Sorceror's Stone in USA) see's Harry find out that he is an actual wizard and, according to Hagrid (Keeper of Grounds and Keys at Hogwarts Castle)...

We see Harry at the mercy of the horrible Dursley clan, who treat him awfully.

Luckily, Hagrid comes along to remove him from their world. But unfortunately that is only the beginning of his troubles!

The second film was Harry Potter and the Chamber of Secrets.

In this movie we find our three intrepid heroes hot on the tail of the "Heir of Slytherin", or so they thought.

The "Heir" proves very elusive as each lead turns cold until finally, with the help of a very whiny ghost, they enter the Chamber of Secret's in the bowels of Hogwarts - only to be confronted by a fearsome monster!...

Next up was Harry Potter and the Prisoner of Azkaban.

Unfortunately, Richard Harris had passed away by the time they made this movie.

Luckily, they obtained the services of Michael Gambon and the actor change made the continuation of the character of Dumbledore a seamless one for Potter fans and enthusiasts.

Additionally, in this movie trailer, we're introduced to "freaky" new characters like:

a scary werewolf (Professor Lupin's alter-ego) and the like.

We also get to see curious objects such as the "time-turner" that Hermione uses to get to all of her classes and, not to mention, save several lives!

And best of all, when Harry himself conjures up a wonderful spell: Expecto Patronum, one of my favorite parts in the whole movie...

The fourth trailer we'll see today is Harry Potter and the Goblet of Fire.

The adventure continues as we find out that magic doesn't just reside in the hallowed ground of Hogwarts but beyond its walls in far-flung places.

The girls of Beauxbatons and the boys from Durmstrang visit the school to compete in the exciting but dangerous Triwizard Tournament, where they're promised "eternal glory".

Cedric Diggory gets that alright but not in the way he expected!

We also get to meet Mad-Eye Moody and his "doppelganger" (due to a generous amount of poly juice potion) Barty Crouch Junior.

There's all manner of dangerous goings-on such as tests against dragons, underwater creatures and a mixed-up maze that takes a life!

Yes, a "fierce, fierce friend" is "killed off" (as alluded to above) and now things are getting really serious for the boy wizard and his crew...

Now get ready for Harry Potter and the Order of the Phoenix!

We finally see Voldemort at the height of his powers after being "dormant" for 14 years.

But now he's back, due to a "few drops of Harry's blood" and some ancient dark magic.

But there's also the prim and proper Delores Umbridge who lives not only in her highly ordered world, but also in constant denial of the real dangers of "what's out there."

Harry has to go behind her back and build up "some sort of wizard army", indeed - Dumbledore's Army!

We see in the next trailer (the sixth instalment in the series) Harry Potter and the Half-Blood Prince, that Harry is going to be "collected" by Professor Slughorn.

This is the only means by which they can garner from him a long held memory that will unlock Lord Voldemeort's true intentions and secrets about his horcruxes.

Indeed, 'the past holds a dark secret" as Dumbledore tries to get to the bottom of his most valuable collected memory which is in fact - a lie!

In the last book of the series, Harry Potter and the Deathly Hallows, we see the movies split into two parts.

It's basically a "road movie"in Part 1 where Harry, Ron and Hermione are engaged in the hunt for Voldemort's remaining horcruxes to destroy them.

But Dumbledore's death complicates things somewhat and they're working "blind" with just a few clues to go on...

I hope you enjoy them! To delve deeper than each  Harry Potter trailer does go here... 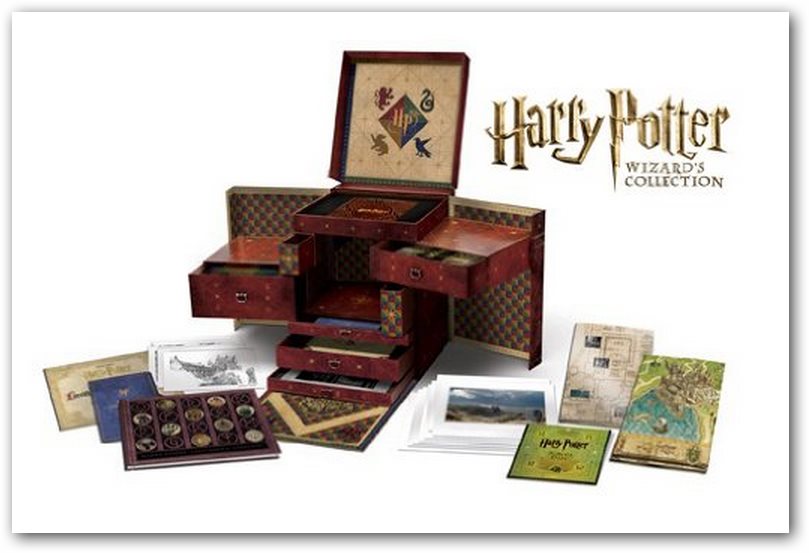 Get ALL the films NOT just the trailers here...