Order Of The Phoenix

Order of the Phoenix Quote: “We've all got both light and dark inside us. What matters is the part we choose to act on. That's who we really are.”, Sirius Black to Harry

The Order of the Phoenix is the fifth Harry Potter book and film in the series.

Again, it was another roaring success as it sold 5 million copies of the book on the first day and the film grossed 939 million!

Can this woman write or what?

There's still a good deal of fun and humor in this book but there are certainly darkening themes developing.

Lord Voldemort is gaining more power and having a lot more influence, including gaining many more followers.

Even the Ministry of Magic is being affected because Cornelius Fudge, (the Minister of Magic) is becoming more paranoid everyday and keeps insisting that the Dark Lord "is not back!"

This is great dramatic irony of course because we, as the audience, know he definitely is.

Order of the Phoenix Owlpost

When Harry is attacked, along with his cousin Dudley, by two Dementors that have strayed far from Azkaban we know Voldemort is behind the attack.

Because Harry uses the Expecto Patronum spell to fight of the dementors he is called to an inquiry for "underage use of magic in the presence of a muggle."

Harry tries to tell them it was because he was attacked by Dementors but of course, Cornelius Fudge refuses to believe it.

Luckily, he is defended by Dumbledore and he is able to have the charges dismissed as trivial.

But that is only the beginning of his troubles in the Order of the Phoenix! Dumbledore is trying to avoid Harry because he is aware of the connection between Lord Voldemort and Harry and is unsure if Voldemort himself is aware of that connection.

By ignoring Harry he hopes he won't draw attention to it.

This is a tactic that becomes increasingly unsuccessful, especially when Harry "sees" the attack by Nagini on Mr Weasley.

The tension keeps rising until the "showdown" between Harry and his friends, now known as Dumbledore's Army, and the Death eaters inside the ministry of magic.

Order of the Phoenix Ultra HD 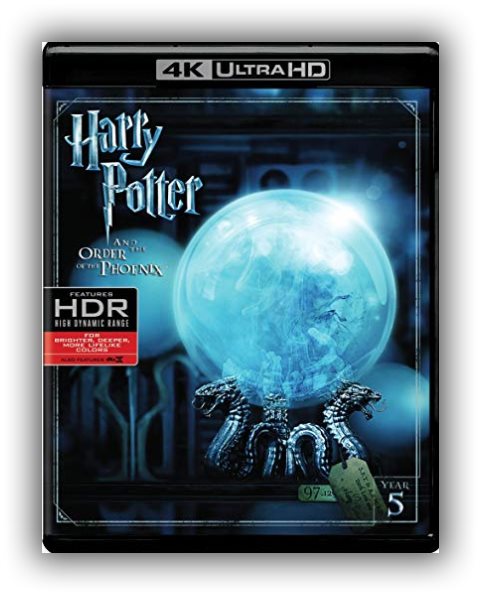 There are many other themes running concurrently of course in the Order of the Phoenix.

Fred and George Weasley are starting to realize that their career paths are not going to follow the well-worn way of academia.

They are indeed fledgling, yet burgeoning entrepreneurs.

They have a wicked sense of fun and are out to put the stuffy, stodgy new teacher for the Defense Against the Dark Arts, Professor Umbridge, in her place.

They meet with a good deal of success during one of the O.W.L. exams but due to their spectacular display of "disorder" (in opposition to Umbridge's cry of "I will have order") hasten the end of their Hogwarts career.

This funny theme echoes through to the beginning of the next film, the Half Blood Prince.

If you listen carefully at the beginning of the film a toy Umbridge is heard to say "I will have order" as the camera shot moves inside the twins new shop in Diagon Alley.

Another theme that runs through the film is the one of the "Prophecy".

The prophecy states that either Harry or Lord Voldemort must die, as only one can live.

The prophecy itself, which looks like a crystal ball, is kept deep inside the Ministry of Magic but can only be physically retrieved by the one who the prophecy is about.

The recurring dreams Harry has of retrieving the prophecy get stronger and clearer until he realizes what he must do.

But Lord Voldemort and the Death Eaters are also aware of the prophecy and wait and watch Harry like vultures, waiting to get their hands on it.

Up to this point in the Order of the Phoenix, Harry, Ron and Hermione had been training new recruits to Dumbledore's Army inside the Room of Requirement that Neville Longbottom located for them inside Hogwarts Castle.

This room has everything that they need for their purpose. What another creative and excellent idea by Rowling.

It fits so well with the story and creates a little "oasis" feeling within the movie.

A little "safe house", if you will until it is violated by Umbridge and her minions (including Draco Malfoy, Crabbe and Goyle).

With their newly developed skills they converge on the ministry of magic to retrieve the prophecy only to be tracked and attacked by the more skilful and vicious Death Eaters.

Unfortunately something goes terribly wrong and this leads to much devastation for Harry and there's a dramatic encounter between Harry and Bellatrix Lestrange, then Dumbledore and Voldemort.

Overall, this book and film is a great addition to the Harry Potter series.

I think the Order of the Phoenix will always stand the test of time for generations to come.

To watch the Order of the Phoenix trailer go here...

Searches Related to Order of the Phoenix

order of the phoenix book

harry potter and the order of the phoenix summary

harry potter and the order of the phoenix game

harry potter and the order of the phoenix trailer

harry potter and the order of the phoenix subtitles