Harry Potter and the Half Blood Prince Quote: “It was important, Dumbledore said, to fight, and fight again, and keep fighting, for only then could evil be kept at bay, though never quite eradicated. . . .”

In the Half Blood Prince Alan Rickman has a great vehicle to show his acting wares as the complicated and intriguing character of Severus Snape.

He does this with both relish and great skill, never betraying the fact to Harry that he may indeed eventually end up as one of his saviours.

The Half Blood Prince is, in fact, the sixth book in the Harry Potter series by J.K. Rowling.

Once again Harry Potter is pitted against Lord Voldemort but this time he gets a glimpse into Voldemort's past via a saved memory.

Dumbledore has this memory from the re-recruited Professor Slughorn, who is the new potions master at Hogwarts.

This memory, the most important of all according to Dumbledore is, however, a lie!

Harry is set a task to let Professor Slughorn "collect him" so as to get to the bottom of this stored memory.

In a particularly clever plot development in the Half Blood Prince, Harry is forced to use a tattered, old spell book he found in the cupboard in Professor Slughorn's potions class.

The book is marked with the name "Half Blood Prince" on the inside jacket.

He wonders who the mysterious 'Prince' may be.

Because of instructions and notes left in the margin of the book, Harry is able to "leap-frog"even Hermione in his ability to perfect difficult and often dangerous spells.

These spells in the margin offer a contrary opinion to the book itself, but seem to work "like a charm" - much to Hermione's chagrin!

For example, he concocts a "perfect draft of Living Death" potion and so wins for himself a small vial of "liquid luck" from Professor Slughorn as a prize.

This new ability in Potions class, as you would predict, gets Harry into more trouble than it's worth :))

And so it goes.

Overall, this sixth instalment of Harry Potter called the Half Blood Prince is darker, gloomier and even scarier but is not without humor.

Rowling has definitely given her characters more depth and the three main characters are indeed behaving more like young adults than children. 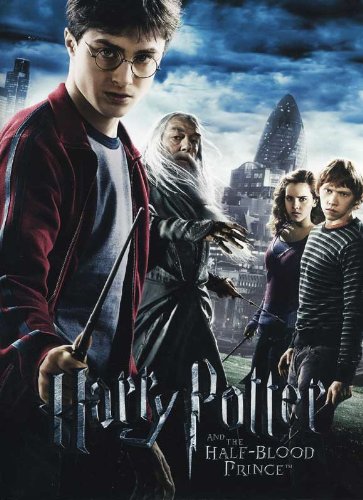 The fact that this book sold 9 million copies in 24 hours is testament to the fact that it is a great book.

The only other book that outsold this one was the final instalment of the series, namely: The Deathly Hallows.

Some of the ideas in this book are truly the work of a creative genius.

I love the idea of the Vanishing Cabinets that Draco Malfoy uses to allow the Death Eaters to enter the supposedly protected Hogwarts castle.

Also, the idea of an "unbreakable vow" adds weight to the seriousness of the drama too.

Indeed, the vow between Snape and Malfoy's mother, Narcissa, further confuses the issue as to whether Snape is in cahoots with the dark side as a death eater, or working with Dumbledore to eventually destroy the Dark Lord's power.

Actually, my ears "pricked up" in the movie version in the Snape/Narcissa unbreakable vow scene when this conversation transpires...

"Will you, Severus Snape, watch over Dracoy Malfoy as he attempts to fulfill the Dark Lord's wishes".

And will you, to the best of your ability, protect him form harm?

And if Draco should fail, will you yourself carry out the deed that the Dark Lord has ordered Draco to perform?

Now this shows the "duplicity" of Snape in my opinion and I reckon ol' J.K. did this on purpose.

As a teacher I've always understood the use of the word "will" as opposed to the word "shall".

Basically, the word "will" could be taken to mean it might happen as where the word "shall" is used when we wish to express a definite determination or to emphasize absolute certainty.

Now we can see clearly that Snape was given the "out" he is always looking for and it's totally in keeping with his character flaws.

Sorry, I was just thinking out aloud :))

But you can check out the rule here. Just scroll down the page until you see...

Determination or duty: you shall go to the ball!

Love is a STRONG Theme in the Half Blood Prince...

Love is another strong theme in this book too.

Not just the idea of universal love but of the budding romances of the maturing characters.

Harry himself finds himself falling for Ginny Weasley, as she is for him.

Ron and Hermione come one step closer too after Ron "rids" himself of the terribly clingy, love-sick Lavender Brown.

Lavender is one of those teenage individuals who are the only one not to see how, ironically, their behaviour repels rather than attracts the one they supposedly love.

We've all been there I suppose and it's the old story of "putting an old head on young shoulders" as to what's needed.

But then it wouldn't be funny to us!

In fact, following on with the theme of love, we have the love potions used throughout the film – but having an almost opposite effect!

We see Ron nearly die when he's poisoned after drinking a celebratory drink with Harry and Professor Slughorn after he was cured of the strong love potion of Romilda Vane (which was meant for Harry).

The love potion was of course meant for Harry himself but Ron ate the chocolates that Romilda had left for Harry that were "loaded".

The poison was in the bottle meant for Dumbledore and was put there by Draco Malfoy.

Actually, there's a wide theme of potions/liquids in this book and film and they're thick with irony.

For example, Dumbledore's power is almost rendered useless under the influence of the liquid left by Voldemort in the cave, just recovering in time to save Harry from the re-animated corpses.

Even Hermione becomes a victim of liquid, if only slightly.

She suffers from the "injury" of embarrassment when the butter-beer leaves a foam moustache on her face in front of Ron and Harry at the Three Broomsticks.

There's the aforementioned "draught of living death" where it was mentioned by Slughorn that .. ."One drop would kill us all!"

I also think Rowling's use of the pensieve in the Half Blood Prince and other movies is another fantastic creation by her.

It appeals to our inner desire of reliving our experiences and out innate voyeurism.

We all like to peek into a neighbor's life if only briefly, and with the pensieve it's like we're being let in on a big secret.

Additionally, the use of the "Room of Requirement" in the Half Blood Prince is an interesting study this time around.

In the prior movie, Order of the Phoenix, the Room of Requirement was used by Harry and other members of Dumbledore's Army for good and to train themselves up to withstand Voldemort's and the Death Eaters' increasing power.

This time the room is used by Draco Malfoy for very different and evil purposes, even if his "heart's not really in it."

The Room reminds me of our own subconscious mind in that whatever you set it to do it will attempt to do, regardless of whether it's good or bad, right or wrong.

To do the right thing, which is a major theme of both the Half Blood Prince and the whole book series by Rowling, is a matter for your conscious mind.

Like both Dumbledore and Sirius Black both said, it's a matter of choices! Along those lines in the Half Blood Prince I think there's no finer and more powerful quote than this by Harry Potter to Professor Slughorn...

"Be brave Professor. Otherwise you disgrace her. Otherwise she died for nothing...and the bowl will remain empty forever."

Overall, I think this movie and book stands up well in comparison with all the other films and books.

There is a great deal of character and plot development and it continues the "crescendo" towards the final countdown.

I highly recommend this book and film.

To see the Half Blood Prince trailer go here...

Searches Related to Half Blood Prince

harry potter and the half blood prince cast

harry potter and the half blood prince movie

harry potter and the half blood prince book

harry potter and the half blood prince summary

harry potter and the half blood prince 2009 123movies

harry potter and the half blood prince game

harry potter and the half blood prince trailer